We hear much talk about Agile and agile techniques, but how much is it practiced in the real world? Is it still just a fad, another set of buzz-words, or can it really be taken as the right approach to software delivery.

Emerging as one of the preeminent surveys for the agile development market, the State of agile Development survey has received more than 20,000 responses in its first six years – it truly is a key indicator of the State of Agile.

The seventh annual survey took place at the end of 2012 and the results make interesting reading.

They provide further evidence that agile is now far from a niche approach but an expanding and growing trend which should be included as a mainstream delivery approach. The results also show a move towards enterprise-wide adoption with many scaling the approach across their organisation.

The general perception of agile is on the up: the number of companies who plan to implement agile development practices has increased from 59% in 2011 to 83% in 2012. Furthermore, of those already using agile, one-third will continue to do so, and only 3% intend to cease.

Organisations are continuing to scale agile beyond single teams and single projects: the number of teams using agile within an organization is increasing.

87% are implementing across multiple teams 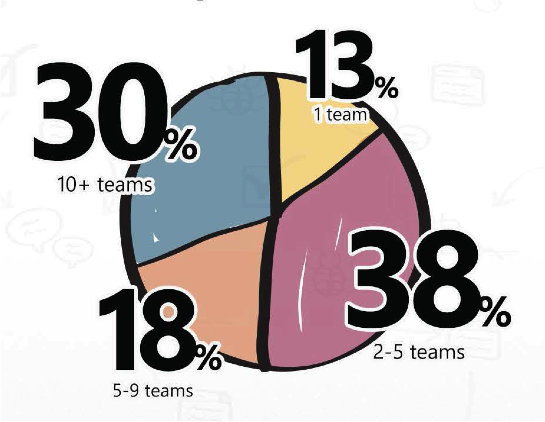 This year, 48% of respondents were from companies where agile practices have been adopted across 5 or more teams – up from 33% in 2011; and 30% said they have 10 or more teams using agile.

Organizations with two to five agile teams also grew to 38% this year.

Project success rate has also grown with 84% of respondents saying that at least half their agile projects had been successful (compared to 77% in 2011).

As for the most popular agile techniques and methods, from the survey, it transpires the techniques most regularly used are daily stand up meetings, iteration planning and unit testing. The most notable trend this year is the increased use of Kanban principles (nearly doubled in 2012). By far, Scrum continues to lead the pack as the most used agile methodology (72%).

It can’t be all good news - how about the issues?

The most frequently cited problems behind any agile project failures have been a failure to integrate the right people (34%) and to instil a one-team culture (28%).

Despite the uptake in management support, survey results suggest that the greatest barrier to increased adoption appears not to be awareness of the methodology, but internal company cultures: respondents said that lack of management support and "general resistance to change" were major barriers to adoption.

So what is cited as the benefit of using agile? 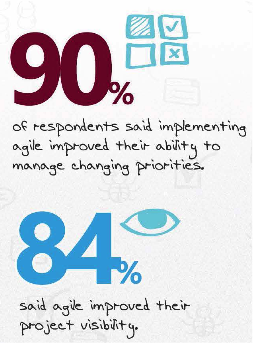 In the 2012 the respondents’ perception of agile most prominent benefits consisted of:

Who responded to the survey?

To appreciate the significance of the survey it is worth highlighting some of the respondent characteristics:

Dowload a full copy of the survey results here

If you are embarking on your first Agile project, or looking to scale Agile acorss your organisation then contact This email address is being protected from spambots. You need JavaScript enabled to view it. to arrange an informal discussion with one of our Agile change specialists.